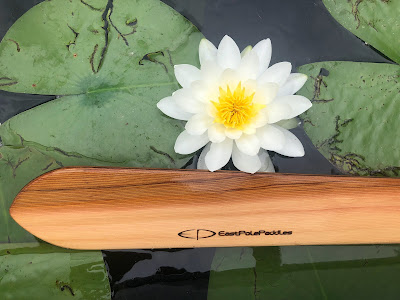 I hadn't seen any reviews of the Aleutian Paddle from East Pole Paddles, so I thought I would write one. I'm pretty new to the sea kayak sport, having paddles at Scout camps on Scout outings with rented equipment for the past 20 years. 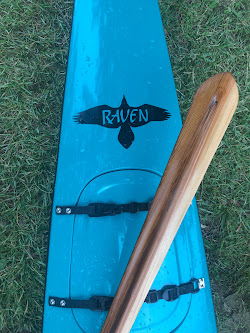 Finally I bought a pristine fiberglass 1998 Eddyline Raven kayak. The owner was gracious enough to include a Bending Branches Infusion Dream paddle. The paddle was relatively lightweight and easy to handle. This was great until my wife got ahold of it and claimed it for her own. It was lightweight and the curved handle and padded grip suited her. I quickly hopped on Facebook Marketplace and saw a Kevlar one-piece paddle called the Aqua-Bound Dura Flex. That has to be lightweight being made of Kevlar/fiberglass I thought. My first trips on Big Lake near me with the Bending Branches were great. I tried the new Kevlar paddle and had a miserable time. The Aqua-Bound paddle, was heavy enough to give my previously injured left shoulder a fit. I decided to weigh the new paddle: 2.8 lbs (1134g). Having this information I dove into the internet and looked up lighter weight options. Most of my paddling would be touring, but I would want to practice rolls as well, but that would not be the primary usage.

I researched the best paddles for bad shoulders. The internet, in all its wisdom, kept mentioning "Greenland Paddles". The Greenland paddles didn't need the high position needed with Euro paddles. I was intrigued. I decided to look up if there were any proof to the fact that the Greenland style paddle was better for touring and low impact on shoulders than the Euro blade. Low and behold I found a study in Sports Engineering by Pascal Hémon called "Hydrodynamic characteristics of sea kayak traditional paddles" published in 2017. Hémon, a research professor from the Centre national de la recherche scientifique compared the traditional Greenland, Aleutian and European paddles independent of a kayaker for performance. 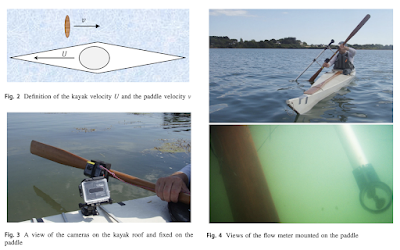 Hémon found the Euro blade was "more efficient than the traditional paddles because of its shorter length to width ratio which contributed to a larger inertia effect. However, the force obtained with the traditional paddles better follows the imposed motion by the kayaker so that they are more comfortable and less tiring in the context of long distance trips, as those practiced in sea kayaking." 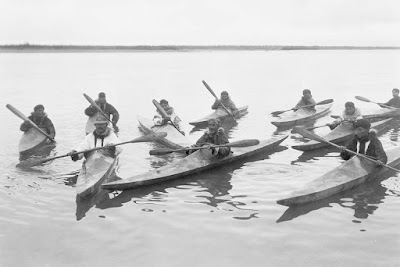 I searched and it didn't take long to find the GearLab Outddoors Akiak paddle (about $368 plus $25 shipping). It looked promising. The weight was about 910 +/- 30g. I liked the look, two-piece construction, quick shipping and lots of good reviews. Gear Labs Kalleq in Regular weighed in at 750 +/- 30g and sold for $463 shipped. I looked some more and found a number of other great manufacturer's including Joe O's paddles (about $395 with carbon fiber ferules plus shipping).

Then I found Christopher Crowhurst from Qajaq Rolls and he had some really in-depth reviews on traditional Greenland paddles made of Western Red Cedar (Thuja plicata). Of particular note, he reviewed two cruising type "Aleutian Paddles". One from Adanac Paddles (just across the river in Canada - not too far from me in Michigan) and the other East Pole Paddles in Estonia near Greenland. The Aleutian blade is double-ridged, with a concave and convex surface. The style is based on paddles in Museum collections from the Northwest US and Canada. 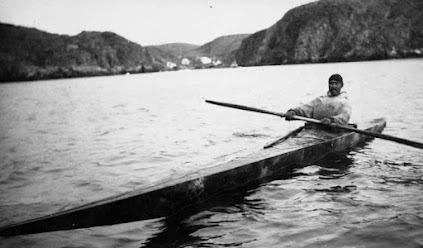 Christopher had much to say, but I really liked the Aleutian style paddle (aka Alaskan paddle) for its power, traditional design based on thousands of years of usage and purpose-built nature for cruising. The East Pole Paddle was reviewed well, and noted the lightweight nature of the paddle, but Christopher said its Western Red Cedar may not be as strong as the heavier, tighter-grained Adanac. Pricing for Adanac's traditional Aleutian Paddle was $425 Canadian (not including shipping). That came out to about $340 for the US dollar. (Note: Since that time they lowered the price to $350 CAN that comes out to $270US not including shipping). Jill Ellis hand carves each paddle and it looks like they make a fantastic product. I didn't see any mention of weight, but suppose it would be heavier than the East Poles Aleutian due to its denser wood. The other item that Christopher raved about from Jill was her Paddle cover - which comes free with the purchase. 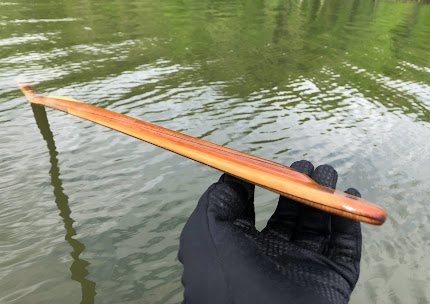 Christopher reviewed the East Pole Paddle in 2015, and quite a lot has changed to the original East Pole Aleutian design. They have a new paddle that has two layers of carbon embedded along the entire length of the paddle. These carbon laminations are said by East Pole to add significant strength and stability to their Aleutian paddle. According to their web page, the weight of each paddle was typically 700-1000g.

According to East Pole - the Aleutian paddle has asymmetrical blades with two distinct sides - the sculling side and the power side. The ridged side was for powerful charging on a hunt while the flat side was for quieter paddling. They claim it's a 2-in-1 paddle. 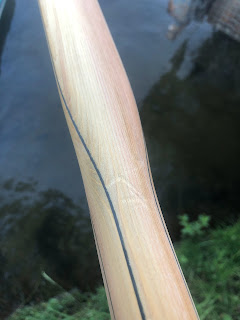 I reached out to Margus Lelle at East Pole Paddles to discuss sizing and we agreed the 225cm would work best for my size (5' 8" and about 145 lbs). I mentioned I was looking for a lighter weight paddle and the lower weight on the scale would be best if possible. My thinking was I would keep the weight off my shoulders and that the dual carbon layers would add the strength needed for rolls once I progressed to that point. I certainly won't be in the league of Fredrik Lindland (aka Fredrik_Rolls), and others, but hopefully will make a go of it.

The best part was that shipping was included in the price to the U.S. Originally I was looking for a two-piece Greenland Paddle to lessen the hit of shipping such a long product. Somehow East Pole Paddles is able to incorporate it into a great price. I paid $308 for the paddle and 3-layer bag shipped to Michigan.  Margus was to hand pick a paddle and went right to oiling it. 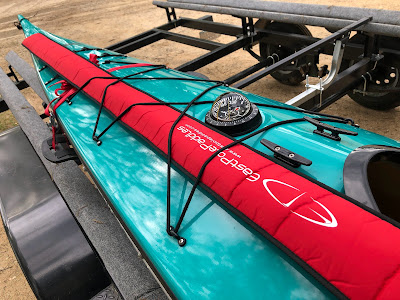 The process took about a week and then they shipped out. I was elated to see the long one-piece paddle arrive unscathed and in perfect condition. I'm sure the very nice and practical 3-layer paddle cover helped pad the paddle during shipment as well. The workmanship, or machining, was very nice. The length is 225cm, the shaft is oblong (almost rounded triangles in cross section) with a width of 1.6-inches (4.1cm) by 1.1-inches (2.8cm). The widest part of the blade is 3.1-inches (7.9cm). The thickest part of the blade at its end is .36-inches (.9cm). 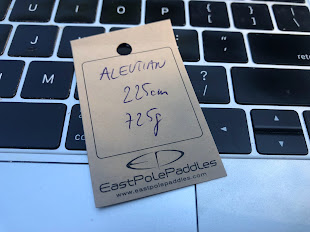 The paddle features very smooth cedar wood with a looser grain of cedar as Christopher had mentioned. The two layers of carbon were evident and looked a bit high tech from my perspective - yet still traditional to all but the eagle eyed. According to East Pole Paddles, "the carbon lamination on this paddle uses innovative material and processing science developments from the University laboratory." High tech indeed. They also state it is "probably the best cruising paddle ever." Quite the claim - looking forward to the specs.

The paddle had a tag that listed the weight as 725g. Just what I was looking for. I weighed it a few months later and it came in at 731g. Most likely a bit heavier after the layers of oil were applied. The weight was very-much in line with the Gear Labs Kalleq - now it was time to try it out. 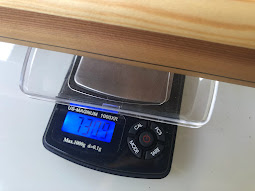 The feedback from the paddle was really a joy - the bubbles on the paddle were sent right through the paddle to my hands - like sensory feedback. I really felt like I was more in touch with the water and worked on my stroke to quiet the paddle going in, through and exiting the water. Best of all, there was no shoulder pain after the first session out. On the lake for the first time, I noticed feedback and sensations I'd never before noticed with the Bending Branches. The paddle was effortless to handle and allowed me to get into a flow very quickly. I watched a number of videos and started to work on lowering my elbows and trying the Greenland paddle stroke. 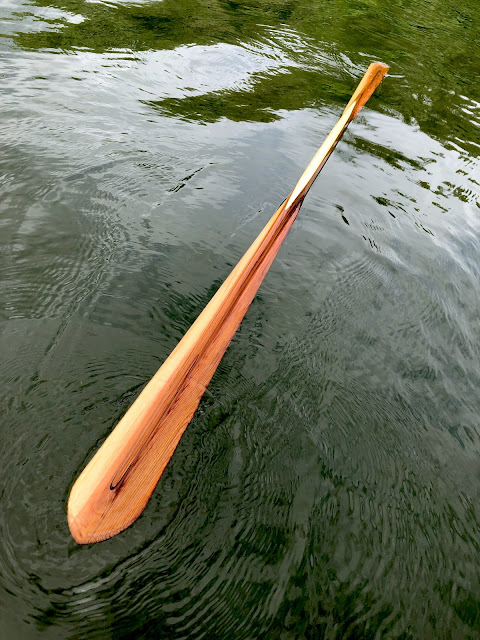 I practiced with each side of the paddle, but preferred the power (non flat) side. It seemed to provide more "umph" to each stroke, and didn't seem to flutter as much, especially when paddling harder. I couldn't be sure if that was just a feeling or fact. 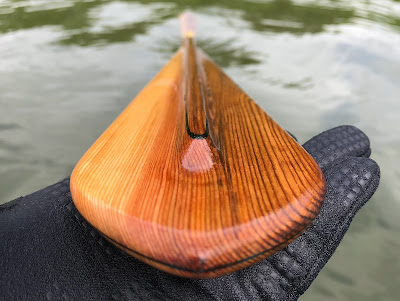 I could easily shift my hands up or down the shaft to the raised spine to have a longer stroke on one side of the kayak. The transition on from loom to blade is rather smooth with a pronounced power bulge on the one side. This may be a negative for rolling, but is another excuse to get a dedicated Greenland paddle for that purpose. 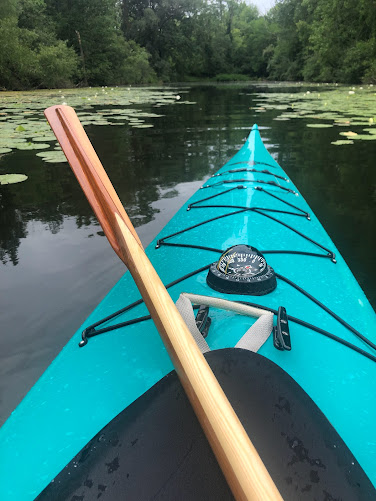 The only other negatives I see on the Aleutian are that it has no bone type protection for the tips. I really like the bone edge glow tips on the Isigaa and Nanook. A lot of the paddling near me would be on shallower lakes and possibly on rivers. The added protection on the tips would be greatly appreciated. Not sure why it wasn't an option on the Aleutian paddle. Perhaps because it was meant more for cruising - but you still have to get in and out of the kayak - and it could be rough on the softer Western Cedar that East Pole Paddles uses.

I may also be looking at a second Greenland style paddle for dedicated rolling and noticed East Pole Paddles has a new 2-piece Nanook 2 that was introduced in August of 2022 after I purchased my Aleutian. Not sure why it doesn't have the bone edge as an option, but the paddle may be next on my list. It would be nice to have a two-piece paddle so a second paddle could be stored on the kayak as a back-up, for travel and overall convenience. 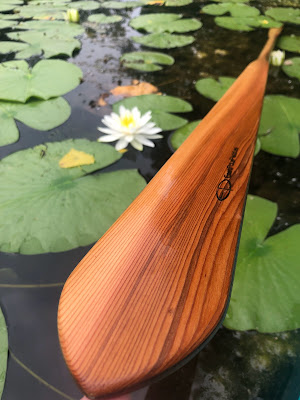 Having put the paddle through numerous outings, the wood is starting to look a bit dry. I applied NOW organic linseed oil to the paddle and it has its original appearance again. This is the same linseed oil that was highly recommended for Swedish Gränsfors Bruk axe handles. I highly recommend this paddle for anyone looking to take some stress off of their shoulders. This Aleutian paddle is very lightweight, yet by all appearances, very strong as well. It is a beautiful piece of functional art that gets many positive comments whenever it comes out of the three-layer soft case.
Posted by Lee Ekstrom

Lee Ekstrom
Love my job as Creative Director at Publicis - Razorfish. I am the lead product specialist for the Jeep brand. Note: The views expressed in this blog are my personal views and they do not represent the views or opinions of Stellantis in any way. 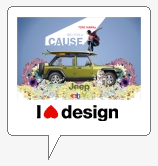